Corfe Mullen are team of the month 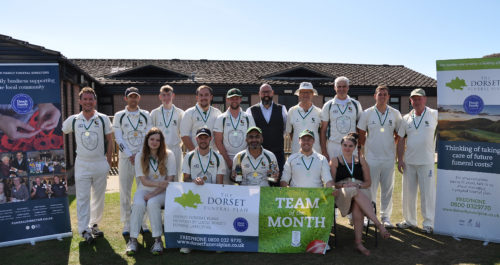 Corfe Mullen Cricket Club picked up the Dorset Funeral Plan Team of the Month award for August – after four wins led them to the top of division three and promotion.

During the final month of the season they defeated Sturminster Newton, Dorchester IIs, Hamworthy Recreation IIs and Sherborne IIs.

Rupert Oakley from the sponsors presented the team with a trophy, individual medals and a bottle of bubbly ahead of their last game, a friendly against a touring side.

Skipper Zeeshan Haider, whose seam bowling was integral to the success, said: “We had a number of players who stood out but the whole team made it happen.

“We won eight games on the trot at the end and finished 22 points ahead of Dorchester IIs.”

Rupert Oakley from Douch Family Funeral Directors that runs the Dorset Funeral Plan, said: “I work in the company’s newly built Lesley Shand branch in Corfe Mullen so it was great to see this team pick up the award.

“They won 12 out of 16 games during the season and were worthy winners of the August award.”