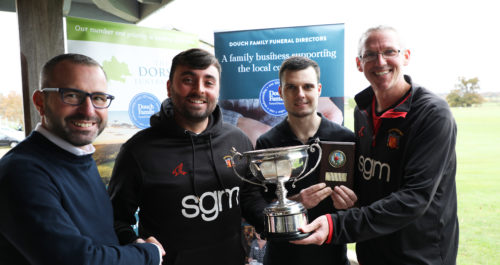 Dorchester Cricket Club collected the trophy for winning the 2021 Dorset Cricket Board Premier Division after a nail-biting end to the season.

Shane Watson from sponsors The Dorset Funeral Plan presented the trophy that Dorchester retained after winning it in 2019 – pre-Covid.

James Dunham, Jamie Barrett and Mark Derrien from Dorchester received the award at The Leaze, home of Wimborne and Colehill Cricket Club where the presentation afternoon was held.

On the last Saturday of the season Dorchester didn’t have a game and had to wait until other matches were concluded before they knew they’d won.

Dorchester’s success relied on a real team effort rather than on a couple of stand-out players – although Dan Belt returning from retirement certainly helped.

Runners-up in the Premier League were Poole Town – a position they’ve occupied in five out of the last six seasons.

Poole bowler Joey Wormington was the division’s leading wicket taker, a title he took in the last campaign of 2019.

Moving up to the Premier League after a number of successful seasons are Division 1 champions Puddletown.

Runners-up in Division 1 were Swanage, who took the spot after a season in which Hamworthy and Stalbridge both had periods in that position.

Division 2 was the most competitive of all theleagues with only 32 points separating third and tenth.

Two teams did pull away towards the end of the summer and it was Blandford who took the title, narrowly taking the first-place spot from Poole Town 2s.

Luke Carter for Blandford scored 603 runs and bowlers Rob Harding and Aaron Day did damage with the ball.

The only team to go unbeaten this season were Chalke Valley who took the Division 3 title, largely due to their weight of runs; captain Joe Weld making 535 and Guy Souch making 758.

Runners-up were Charlton Down who bounced back after their 2019 relegation. They possessed the division’s leading wicket taker in Matt Stevens. Jack Eveleigh and Cameron Lucas also wielded the willow with great aplomb.

Cattistock and Symene took the Division 4 title with 13 wins and just two defeats – giving them the second highest points total in all divisions.

Runners-up in Division 4 were Bere Regis 2s who have moved up three divisions since 2017 – Cian Evans with the bat and Tom Swain with the ball doing plenty of damage.

In division 5 East and South the youngsters of Winton 3s battled through the season to take the title with Dylan Lyons, Caitlin Chissell and Liam Crutchley all making more than 300 runs.

Runners-up were Marnhull 2s who fought off a youthful Wimborne 4s for the spot.

In Division 5 North and West it was Bradford Abbas who bounced straight back after relegation in 2019, with all-rounder Jake Williams the stand-out player of the league-winning campaign.

Runners-up in this division were Blandford 2s who suffered only two reverses.

Player of The Season

The player of the season through all the divisions was Sherborne’s Josh Lawrence who scored 727 runs at an average of 121.17.

The Under 18 performance of the season went to Wimborne’s Lewis Freak for his knock of 203no against Cattistock and Symene.

The DACO Fair Play Award in the Premier League went to Sherborne and in Division 1 it went to Marnhull.

And picking up the award for the groundsman of the year was Colin Randall of Wimborne, a club and pitch that has led to the county side returning to Dorset to play their home games.

The Club of the Season award went to Chalke Valley for accumulating the highest points total in the leagues, winning the Dorset T20 cup and getting to the last eight in the national competition.

Also handed out was the Team of the Month award for August, which was won by Hamworthy.

Great to get back to cricket

Nick Douch from Dorset’s Douch Family Funeral Directors that runs the multi award-winning Dorset Funeral Plan said: “After last year’s interrupted season because of Covid it was great to get back to some proper cricket.

“There were seven highly competitive Saturday leagues and it was reassuring to see so many youngsters coming through and doing well.

“Sponsoring the leagues for more than 15 years has given us a great profile and we’ve seen wonderful improvement in so many of the county’s grounds.”

John Ridout, chairman of Wimborne CC and treasurer of the league, said: “Firstly I must congratulate Dorchester on winning the Premier League – and on Poole for coming runners-up again.

“There were some great games this season and despite rain affecting games in May all the leagues were competitive.

“We now look ahead to 2022 and begin preparing for the next season.”