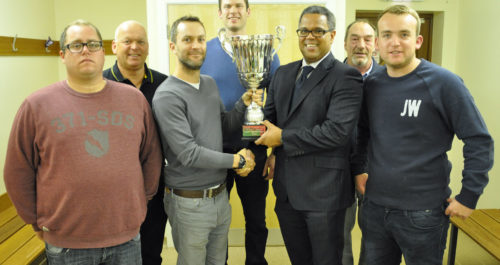 League chairman John Ridout addressed the attendees at Wimborne and Colehill CC and explained how the new league structure had led to some high quality and close matches towards the end of the season.

He said: “We wanted to design a structure than helped improve our best players by having play-off system that meant the best teams played each other more often.”

During the evening league secretary Alan Graham announced the awards that were presented by John together with Nick Douch from the sponsors, The Dorset Funeral Plan.

Nick said: “It is great to see so many clubs across the county playing in these competitive and enjoyable leagues, which we are pleased to sponsor and be associated with. Congratulations to all the winners.”

Kristian Wilson picked up the trophy for Poole Town CC who beat last year’s winners, Parley CC, into second place in the Premier League by winning 14 of the 20 fixtures.

Another club that had a good evening was Shillingstone CC, which won the ‘Club of the Year’ award and picked up its medals for being the August ‘Team of the Month.’

The club’s second team won the Division Four title and the first team lifted the Division One trophy. Both Shillingstone’s teams lost just one game each during the season.

In Premier League II Sherborne CC topped the table and are on their way to regaining their status of a ‘leading Dorset club’, according to Alan Graham. They held off Martinstown CC who picked up the runners-up award.

In Division Two it was Cerne Valley CC who took the title, a club described by Alan as a ‘shining light of West Dorset cricket’. Runners-up in this league were Cattistock CC and both these clubs were described as being consistent and worthy of playing at a higher level.

Wareham CC won the Division Three title, but won’t be promoted due to problems with their pitch, a solution for which they are looking for. Kingston Lacy CC came runners-up, a side with a ‘rich history’ in local cricket.

Swanage CC IIs came runners-up to Shillingstone CC in Division Four, a league that contained five very strong sides, all of which could play at a higher level.

Charlton Down CC took the top spot in Division Five by holding off rivals Chalke Valley CC. Both these clubs were promoted from Division Six the previous year.

Groundsman of the Year went to Robert Edwards who looks after the ground at Blandford CC – but plays his cricket for Shillingstone CC.

And the Special Achievement award was presented to Martin Huntley who scored 231no for Branksome CC. How’s that!

List of winners and runners-up in the Dorset Funeral Plan Cricket Leagues 2014.

Groundsman of the Year