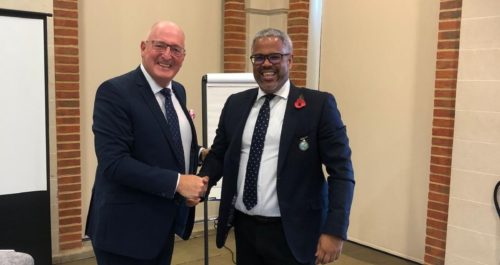 The managing director of a Dorset funeral group has been installed as the European Group Chairman of Selected Independent Funeral Homes.

Nick Douch will head the association for a year and plans to promote it and attract new members.

His company, Douch Family Funeral Directors, has belonged to the US-led organisation for over 15 years.

Founded in 1917, SIFH represents family-owned funeral businesses and has branches in the US, Europe, Australasia and the Pacific.

It has around 40 European members and hundreds worldwide.

Nick said: “It is an honour to be European Chairman and it is an important time having got back after Covid which has affected all of us.

“Despite different funeral traditions in countries there is a lot that is common to everyone.

“We use the association to share ideas and good practice and we have learned from our European partners.

“One of the ideas we have brought back, which we have introduced to a couple of our branches is allow families to visit their loved ones in our chapels of rest whenever they wish with the use of a security card.

“We are also updating our branches and including interactive service chapels from which services can be broadcast and which can be used by community groups.

“We have really felt the benefit of belonging to this association and would encourage others to consider joining.”