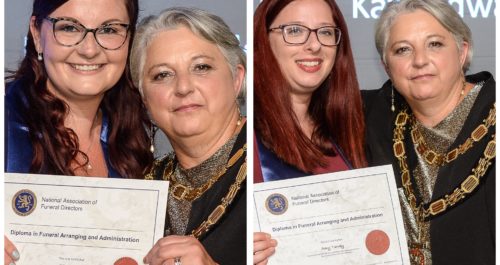 Two funeral directors from Dorset have received their diplomas in Funeral Arranging and Administration at the delayed graduation ceremony.

Amy began working for the group’s Douch & Small branch in Wimborne as an admin assistant when she was 18.

Elise joined the James Smith branch in Swanage three years ago following a career as a freelance embalmer.

Both now have the diploma that is run by the National Association of Funeral Directors and were presented with them at the graduation.

Amy and Elise had to complete five pieces of coursework and then sit oral and written exams.

Nick Douch, managing director of the group that has seven branches in Dorset, said: “It was a tough year in the funeral business; we were key workers during Covid and everyone was working extremely hard.

“So for Amy and Elise to also complete their diplomas was a testament to their commitment and hard work.

“Amy has been with us since she left school and has worked her way up, which is what other members of our staff have done.

“Elise was working as a freelance embalmer and did lots of work for us and when a job became available in the business she jumped at it.

“They both have to complete another diploma before they are fully qualified, and I have no doubt both will fly through it as they have done with this one.”

Amy said: “When I joined as a part time admin assistant I had no idea that I’d stay here and become a funeral director.

“The company really encourages us to progress and pass qualifications and I am looking forward to starting on the next one.”

Elise said: “Moving into funeral directing from being an embalmer was a natural progression.

“I was taking care of the deceased and now I take care of the families as well – it is a very important job.

“Now I’m here I don’t think I’ll ever be leaving.”