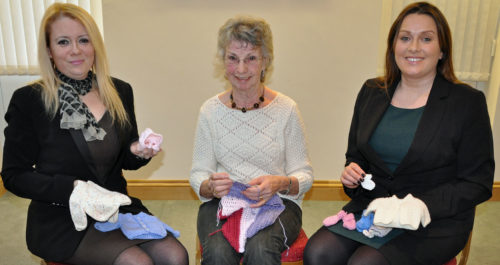 Each of the company’s seven branches will collect the knitted items from volunteers and supply materials and patterns to those who want to take part.

Preemies UK is a not-for-profit organisation that aims to keep neonatal intensive care units across the country supplied with ‘tiny togs for tiny tots’.

There is no company that makes the woollen garments so small and Preemies UK depends on an army of volunteers.

Douch Family Funeral Directors have pledged to help and are hosting ‘Knit and Natter’ coffee mornings at its Ives & Shand branch in Parkstone, Poole.

The other branches in the group are Douch and Small in Wimborne, AE Joliffe & Son in Ferndown, Lesley Shand in Corfe Mullen, James Smith in Swanage, and Albert Marsh in Wareham and Upton.

The babies find it very difficult, if not impossible, to maintain their body temperature so they need clothing that fits well and is designed to allow for wires and the constant monitoring that happens in neonatal units.

Charlie Loveday, a funeral director who works at the Ives & Shand branch, has been involved with Preemies UK for two years since her daughter Lily was born.

She said: “My daughter was poorly and in the neo-natal unit and these little clothes kept appearing for the premature babies and I learned that they were all supplied by volunteers.

“It’s great that our network of funeral directors is now co-ordinating the local effort to keep the clothes being sent to where they are needed.”

Renee Guest, a knitter who has been making the clothes for the last two years, will be on hand at the Knit and Natter sessions to help others learn what is required.

She said: “The clothes are needed across the country and because they have to be washed at a very high temperature they don’t always last very long.

“Also, parents often take the clothes home with them as a keepsake, so there is always a need for more.

“I’m delighted that Douch Family Funeral Directors are involved and ideally we can build on the number of volunteers.”

Nick Douch, Managing Director of the company, said: “This is a great cause and our branches are ideally placed to act as a reception point.

“We will provide materials and patterns, but will gratefully receive any donations of wool, buttons or ribbons that we can pass on to the volunteers.

“And we’d be pleased to hear from anybody who could transport the clothes to Preemies UK at their HQ in Worcestershire.

“All our branches are taking part and in Parkstone we are holding the Knit and Natter sessions in a bid to encourage a few more volunteers to pick up knitting needles.”

The first Knit and Natter session at Ives & Shand on Ashley Road in Parkstone is on February 27 from 10am to midday.