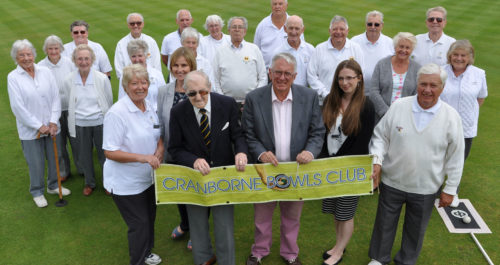 Cranborne Bowling Club has announced a new sponsorship deal with a well-known local funeral director.
Douch & Small, based in Wimborne and part of the Douch Family Funeral Directors group, has got behind the 65-year-old club.

The bowlers play at the village’s recreation ground and compete in the Westbrook Mixed Triples League. They also have a fixture card full of friendlies.

The welcoming club has more than 40 playing and social members and is always looking for new ones.
It has numerous ‘roll up’ events at which potential members – men and women, young or old – are welcome to turn up and try out the sport.

Its founder, Reg Booth, obtained a defunct tennis court on the recreation ground in 1962 and organised a working party to dig out the original three rinks, to which another was later added.

The homely clubhouse – which is still in use – is an old agricultural building thought to have been a chicken shed.
Club captain Dawn Jones said: “We would like to express our gratitude for the sponsorship from Douch & Small which will help us enjoy a long and successful future.”

Peter Douch, Chairman of Douch Family Funeral Directors, which includes Douch & Small, said: “Following our relationship with Dawn Jones through her work with Partnership for Older People Programme in the Ferndown area we heard she was a keen bowler and that her team were looking for sponsorship. We were only too pleased to help.

“Douch & Small in Wimborne has a long association with local groups and sports clubs and we actively try and do our bit for the communities we work in.
“Everyone at Cranborne is very friendly and they have a beautiful green. I look forward to many future visits.”

A trek for Tyler’s Friends

5 of The Best Books About Dealing with Grief