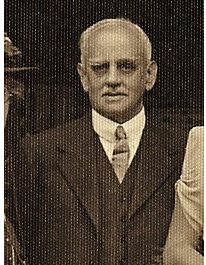 In its 100 year history funeral director FC Douch & Son has survived two world wars and passed through four generations of the same family, of which three are still involved.

The historic Dorset firm, which celebrates its centenary this summer, has witnessed seismic shifts in the funeral trade.

At the start, when the average cost of a funeral was £8 including disbursements, families had little choice over the type of coffin, ceremony or even the funeral date. All funerals were burials, mourners all wore black and were notified of a funeral by the ringing of the Wimborne Minster bell.

Frederick Douch or his son Jack, now aged 89, would cycle around the town delivering postcards the day before to notify pallbearers of a pending funeral.

Today services have become more personal – mourners often wear bright colours, around 71 per cent of funerals are cremations and those opting for burials increasingly choose eco (biodegradable) coffins. The arrival of funeral plans, including the Dorset Funeral Plan, operated by FC Douch, means individuals can choose to pay for and, if they wish, plan their own funerals before they pass away.

Nick Douch, the fourth generation of the Douch family to join the firm, said: “I feel very proud to be a part of such a historic local company. The business survived despite my great grandfather serving in the Great War and my grandfather serving in the Navy in World War Two and that’s largely due to the determination of their wives. Thankfully both men returned safely and continued the business. Despite these odds we’re still going strong.

“We still offer traditional funerals but the biggest change I’ve witnessed since joining is the level of choice now available. The bereaved have begun to celebrate the deceased’s life and are personalising funerals more.”

When Frederick Charles Douch established the business in 1910 in Wimborne Square its focus was selling furniture, upholstery and cabinet making and coffin-making was a small element. FC Douch soft furnishing, carpet laying and furniture attracted a list of esteemed customers, including the Ottoman Bank, Chewton Glen Hotel and local country estates.

The business employed more than 40 people and had eight stores across South and West Hampshire and a large workshop in Church Street, Wimborne.

But funeral arranging soon became the company’s main service and in 1995 the last of the furniture shops closed. Nick’s father Peter Douch, joined the company in the early 90s following a successful career as a Chartered Accountant.

Peter added: “Our business has a strong sense of history and tradition but we’ve welcomed the changes that the last century has brought.  In addition to our in-house changes our family has witnessed big changes in Wimborne – from the closure of the main Wimborne Railway Station in the 70s to the present day with the erection of a Waitrose supermarket on the historic cricket pitch.”

Jack Douch takes a close interest in the business and is playing a strong role in the centenary celebrations.