Knit and Natter sessions are a great success 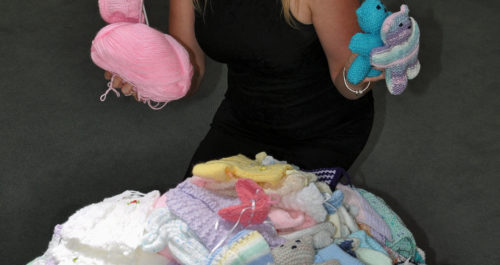 Charlie Loveday with just some of the little clothes knitted by volunteers.

Knit and Natter sessions organised by Dorset’s Douch Family Funeral Directors have become so popular they are continuing throughout the summer.

Volunteers have been attending the Ives & Shand branch in Parkstone, Poole, since January to make tiny clothes for premature babies.

The funeral directors are the local co-ordinators for Preemies UK, which is a not-for-profit organisation that aims to keep neonatal intensive care units across the country supplied with ‘tiny togs for tiny tots’.

The Knit and Natter sessions have become a huge success and they were supposed to stop for the summer but will now continue through July and August.

Vast amounts of clothes have been produced at the sessions and many more have been donated by volunteers.

Knit and Natter sessions are held at the Ives and Shand branch on the last Thursday of the month between 10am and noon. The next is on July 31.

Charlie Loveday, a funeral director who works at the branch, has been involved with Preemies UK for two years since her daughter Lily was born.

She said: “My daughter was poorly and in the neonatal unit and these little clothes kept appearing for the premature babies and I learned that they were all supplied by volunteers.

“It’s great that our network of funeral directors is now co-ordinating the local effort to keep the clothes being sent to where they are needed.

“The volunteers have been amazing and keep bringing in large amounts of clothes. And we are also producing lots at our Knit and Natter sessions.

“The sessions have been so popular that we are going to keep them going through the summer.”

The other branches in the group are Douch and Small in Wimborne, AE Joliffe & Son in Ferndown, Lesley Shand in Corfe Mullen, James Smith in Swanage, and Albert Marsh in Wareham and Upton.

The babies find it very difficult, if not impossible, to maintain their body temperature so they need clothing that fits well and is designed to allow for wires and the constant monitoring that happens in neonatal units.