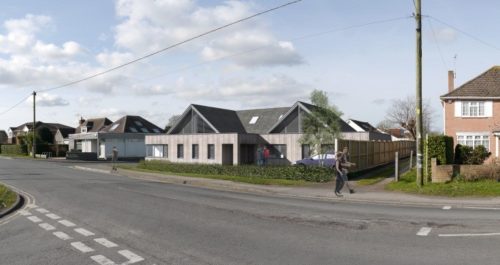 Lesley Shand funeral directors in Corfe Mullen has been nominated for a prestigious award and is up against major brands including Marks and Spencer and Heineken UK.

The funeral business is part of Dorset’s Douch Family Funeral Directors and was put forward by MP Michael Tomlinson.

Corporate Responsibility Group that has listed 20 companies from across the country.

Its scheme was introduced in 2015 to encourage MPs to take a closer look at companies in their constituencies and consider the extent to which they are operating responsibly.

Lesley Shand is a long-standing business in Corfe Mullen and has always made a point of being more than a business.

Indeed, its premises are currently being rebuilt and will include facilities that will benefit the whole community.

Nick Douch, managing director of the group, said: “For one of our branches to be listed alongside some major brands is quite something.

“There is a great team at Lesley Shand who work hard not just for the business but for the community.

“Across the group we try and do our bit; whether that is sponsoring sports clubs, leagues and events, holding bereavement group sessions, organising community functions or doing charity work.

“Like Lesley Shand many of our branches have been around for a long time and we feel it is our responsibility to help in the community which we have served for so long.

“We don’t do it for the recognition, but we are thrilled to have been considered for this award alongside names such as Pfizer Ltd and Zurich Insurance.”

MP Michael Tomlinson said: “I am delighted to have nominated local funeral directors Lesley Shand for this award.

“Lesley Shand has a strong track record and supports numerous good causes locally and I very much look forward to presenting the award nomination certificate in person in due course.”

Baroness Greengross, who sits on the group, said: “The idea of nominating a Constituency Responsible Business Champion is clearly catching on.

“Selecting the best 20 Constituency Responsible Business Champions companies from a strong field wasn’t easy but it was heartening to read about so many companies doing a great job in their local communities.”