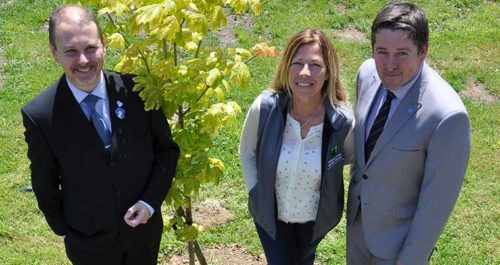 A memorial stone dedicated to Margaret Green whose animal rescue centre carries her name has been unveiled – to mark 50 years of the charity.

The Purbeck stone memorial has been placed in the rescue centre’s newly renovated garden of remembrance.

It was funded by the Dorset Funeral Plan, which is run by Dorset’s Douch Family Funeral Directors.

Margaret Green Animal Rescue in Church Knowle, Dorset, has achieved much in its first 50 years and is busy planning for the next half century.

The stone memorial also mentions ‘Angel’, a rescued horse who passed away in January after 30 years at the centre.
Margaret’s father Jerry began the charity in 1965 but died three years later just before the Church Knowle site opened.

His daughter Margaret carried it on and worked tirelessly for rescued animals until her death in 2009, aged 94.

They are part of the Douch funeral group which also developed and supplies the award-winning Dorset Funeral Plan.

Nick Douch, MD of the group, said: “Like Margaret Green Animal Rescue, our two Purbeck branches have a long and proud history in the area.

“With the garden of remembrance being renovated and expanded in the 50th anniversary year it was fitting there was a permanent tribute to Margaret Green.

“We were delighted to be able to provide the memorial stone which we hope will be there for the centre’s next 50 years.”

Kate Cross, the centre’s fundraising and marketing officer, said: “We have received some wonderful support from companies to help us mark our anniversary.

“The garden of remembrance has been totally renovated and extended and the memorial stone really tops it off.

“It also mentions Angel, our horse who died earlier this year. She was one of Margaret’s favourite animals and to see their names together on the stone is very fitting.”

The stone reads: “In loving memory of Margaret Green 1915-2009. A caring lady who devoted her life to animals. And Angel, our beloved rescue horse 1984-2015. Departed but never forgotten.”