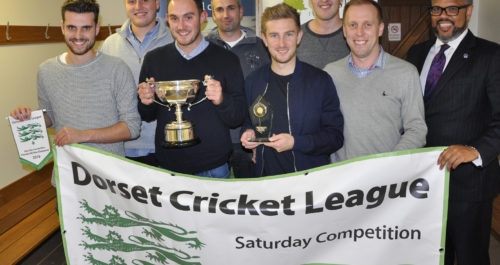 At the annual awards evening the winning team picked up the trophy – four years after they last lifted it.

With two defeats in their opening four games, the season didn’t get off to the best start, but Wimborne had a strong second half of the season and were pushed all the way by Poole.

County Division 1 was hugely competitive with eight of the nine teams occupying top spot at one point.

In the end Shroton CC claimed the title from Bere Regis CC and will make their debut in the Premier League next season.

Division 2 culminated with a ‘winner takes all’ promotion game between Witchampton CC and Poole Town CC – which saw Poole Town CC jump into second place. But Cattistock CC IIs took the title having been at the top from week 9.

In the third division Shillingstone CC IIs came runners-up and continue their rise through the leagues, but they couldn’t beat Cranborne CC to the top spot.

Division 4 saw Charlton Down CC take the title and they have now had just five defeats in the last three seasons. They beat off competition from Hamworthy Rec II who were runners-up.

And Division 6 saw the tightest finish in any of the divisions with Portland Red Triangle CC IIs and Marnhull CC ending on the same number of points. In the end Marnhull CC won on the ‘tie-breaker’ rule.

The Performance of the Year award was hotly contested; Sridhar Ramakhrisnan of Compton House CC and Lee Russell of Ashmore CC both scored 161 in a game, and Dean Rogerson of Bere Regis CC took 7/24. However figures of 9/12 by left arm slow bowler Krishnan Subramanian of Abbotsbury CC was the pick of the performances and he lifted the trophy.

The Groundsman of the Year went to Wimborne and Colehill CC and Colin Randall and James Miller picked up the award for groundsman Chris Randall.

The Dorset Association of Cricket Officers (DACO) Fair Play awards were presented by Merrick Wilkinson and they were won by Wimborne and Colehill CC for the Premier League and Ferndown Wayfarers CC for Division 1.

The Team of the Season award went to Charlton Down CC, with a special mention to Chalke Valley CC.

And the August Team of the Month award was won by Cattistock CC.

Nick Douch of the sponsors, The Dorset Funeral Plan, said: “We’ve been sponsoring the league for a number of years but I can’t remember seasons when there were so many tight finishes.

“We congratulate all the winners and look forward to another competitive season in 2017.”
• www.dorsetfuneralplan.co.uk

How to Turn Your Loved One’s Ashes Into Memorial Jewellery

Planning A Dignified Funeral During The COVID-19 Pandemic

5 Ways To Cope With Bereavement During Social Distancing