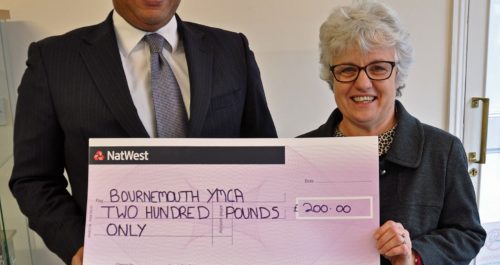 Dorset’s Douch Family Funeral Directors donated £200 to the YMCA thanks to their Christmas trees of remembrance initiative.

Members of the public were invited to hang a message on a Christmas tree, displayed in the group’s branches, in memory of a loved one.

For a donation they could also hang a bauble and the money raised went to the Bournemouth YMCA’s winter appeal for the homeless.

The initiative proved incredibly popular with the trees dripping with messages from the young and old in memory of family, friends and even pets.

Managing Director Nick Douch said: “The Christmas trees of remembrance proved a real success. We were at first apprehensive at how the trees would be received but everyone who came to leave a message thanked us for providing them with this opportunity. We had far more people leaving messages than we thought we would.

“We wanted to give people the opportunity to be able to remember their loved ones during a special time of year. It was also poignant to see so many people thinking of someone they had never met by donating to the YMCA appeal.

“Without their kindness and generosity, we would not be able to hand this money over to YMCA Bournemouth who are continuing to look after the homeless this winter.”

She said: “It’s really good that local businesses are willing to make a difference in other people’s lives.

“This will really help young people in our area.”