Sherborne IIs are Team of the Month 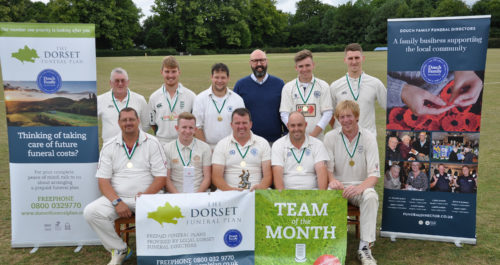 Sherborne Cricket Club’s II XI were named Team of the Month for June in the Dorset Funeral Plan league.

The team managed five straight victories in Division 3 during the month and secured 98 points out of a possible 100.

Under the leadership of Andy Guppy they prevailed against Hamworthy Recreation IIs, Wareham, Kingston Lacy, Stalbridge and Corfe Mullen.

Rupert Oakley from the sponsors, The Dorset Funeral Plan, presented them with the trophy, medals and a bottle of bubbly ahead of their game against Dorset Tigers, which they also won.

With the bat, Ashley Guppy and Dan Baker scored heavily and Roger Parfett and Ben Crossley performed well with the ball.

Skipper Andy said: “It really has been a team effort and everyone has chipped in – there is a great camaraderie.

“We all get behind each other and the aim is to get promoted at the end of the season.”

Rupert Oakley from the sponsors said: “There are some good teams in this league and it promises to be a competitive season.

“To win five on the bounce therefore is a great achievement and I have a feeling this league will have an extremely close finish.”