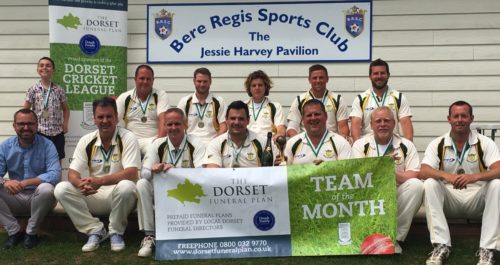 The team are leading Division One and the month of June saw them defeat two rivals for the top spot; Cattistock and Christchurch.

Skipper Rich Cole was presented with a trophy and bottle of bubbly by Shane Watson from sponsors, Dorset Funeral Plan.

Rich said: “We’ve had a settled squad of 13 and have a very strong second team which is helping us.

Everyone’s chipped in with the bat and spinner Dave Griffiths has taken lots of wickets as well as being economical.

“We’re lucky as many committee members give up a lot of time to help out and to coach the kids.

“So far we’re unbeaten this season but there are some hard games to go.”

Shane Watson added: “Both Bere Regis teams have done superbly this season and the firsts deserve the award for their almost perfect performance in June.

“They beat Cattistock, Christchurch, Broadstone and Parley in what is a highly competitive league.”