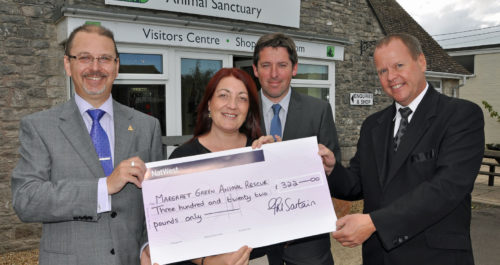 The Margaret Green Animal Rescue Centre in Dorset is over £300 better off thanks to the Dorset Funeral Plan.

The plan is run by Douch Family Funeral Directors and the company attended the charity’s Companion Dog Show and Family Fun Day in Church Knowle.

Staff brought one of their limousines, filled it with balloons and asked visitors to guess how many there were.

The person who guessed nearest to the correct answer of 169 won a £50 meal voucher for The Scott Arms in Kingston – and will be chauffeured there in the limo!

A tombola was also held and the total raised for the animals was £322.

The Dorset Funeral Plan is available from all the Douch Family Funeral Directors’ seven branches.

The rescue charity is the oldest and largest of its kind in Dorset and relies on donations to support the animals it cares for. Each year it takes in over 1,200 abandoned, unwanted and ill-treated animals and finds them new, loving homes. It has a visitor centre in Church Knowle, a base in Winterborne Kingston near Blandford, Dorset, and a third centre in Tavistock, Devon.

The Margaret Green Foundation Trust was founded in 1965 by the late Jerry Green in order to care and provide sanctuary for unwanted, abandoned and cruelly-treated animals. The trust developed over the years under the guidance of his daughter, Miss Margaret Green, who was involved until her death in 2009.

Caron Lane, General Manager of the charity, said: “We are very grateful to the Dorset Funeral Plan and Douch Family Funeral Directors.
“The limousine full of balloons was a great draw for people – and we had nearly 2,000 visitors. “We rely on donations to function and every penny goes to care for the animals. “Unfortunately there are an increasing number of abandoned and poorly-treated animals that are in desperate need of care. “We could not hope to give them the life they deserve without the generous support we receive from businesses and individuals.”

Malcolm Green, from the Dorset Funeral Plan, said: “It was great to attend the dog show and Fun Day and help raise some money for the charity. “I’d also like to thank Phoenix wines in Swanage for discounting the wine we gave away on the tombola, and Pet Luv of Swanage who also gave us some prizes. “We supported the event on behalf of the Dorset Funeral Plan, which is a product available from all our branches.”