The Cattistock that got the cream 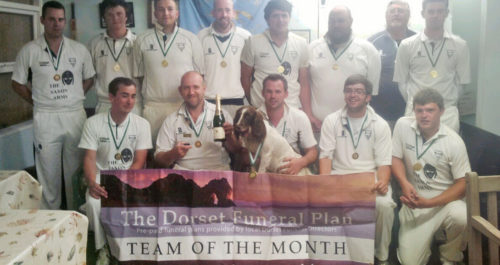 Cattistock, sheltering in the pavilion due to torrential rain outside

They beat their club record when they posted 348 against Bournemouth IIIs, then the following week topped that with 362 against Wimborne and Colehill IIIs.

In that game Steve Tucker scored a massive 158, which included 17 sixes. He brought up his ton off just 33 balls and all but four of his runs came in boundaries.

“Against Wimborne and Colehill our scorer was complaining because he ran out of room in his scorebook.

“We’ve been lucky that many of our batsmen have been in form – in two weeks in June we had four centurions.”
Cattistock play in the Dorset Funeral Plan Cricket League, County Division 2.

Nick Douch, from the sponsors, said: “This was a well-deserved award because of the huge scores they posted in June.
“It must be a daunting task to try and chase an imposing total of over 300 in just 45 overs.”

The team received a bottle of bubbly and a trophy and every player was presented with a medal. And even the club’s dog received a medal.