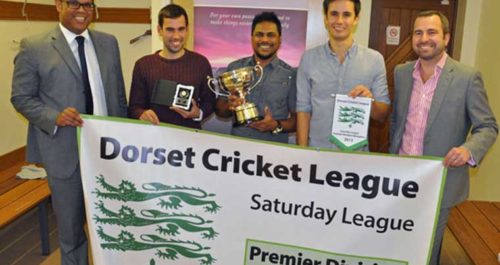 After a fine summer of weather, cricketers from across the county congregated at Wimborne and Colehill Cricket Club for the annual presentation evening.

He said: “It was lovely to see so many completed fixtures compared with last season. We only had one or two wash-outs when no cricket was played.

“As a whole the leagues were very competitive, with some sides on the path back to former glories and others maintaining their success of recent seasons.”

Representatives of the sponsors, The Dorset Funeral Plan, attended to present the awards.

Nick Douch, from the sponsors, said: “The cricket is competitive, but played in the right spirit and that is why we are pleased to continue to sponsor the league and be associated with it.”

Once again it was Parley who marched away with the Premier League title, winning it by 35 points and losing just one match.

Skipper Rosham Embalalagama received the award for the team that has won the league or come runners-up for the last five years.

The team play at Dean Park, the former county ground in Bournemouth, and held off the nearest challengers, Ferndown Wayfarers.

Wayfarers’ captain Eric Linge picked up the runners-up award, which was a great achievement after several seasons flirting with relegation.

In Division One, Sherborne came out on top by quite some distance and Paul Hancock picked up the award and will be hoping that his team once again become a major force in the county’s cricket scene.

Runners-up in Division One were Bere Regis who started slowly but had a great finish to the season.

Due to a restructuring of the leagues no one is promoted out of Division One to the Premier League, but neither Sherborne or Bere Regis lacked in motivation.

In Division Two there was a nail-biting conclusion to the season with just two points separating Christchurch, the winners, from runners-up Shillingstone.

Nick Marsh from Christchurch received the award and confirmed that the highlight of the season was “pipping Shillingstone.”

Both teams won 15 games and lost one.

Cerne Valley and Cattistock fought things out at the top of Division Three, and they were separated by just eight points with Cerne Valley taking the title.

Cerne skipper Dave Baney, said tactics had changed due to the club’s excellent teas. He said: “We’ve taken to batting second because it’s hard to run around after such good teas.”

Cattistock’s Martin Langford received the runners-up award, one of two he picked up on the night.

In Division Four it was Wareham who topped the table with just one defeat, and Bridport came second after pipping Pimperne. Liam Toohill from Bridport was present to collect the award.

In Division Five (South and East) it was Sturminster Marshall who beat Swanage IIs to the title.

After chalking up 14 wins it was Chalke Valley who took the title in Division Six, ahead of Charlton Down, whose representative Peter Tucker said his highlight was “playing so many fixtures. Fantastic.”

These included the Team Achievement award which was won by Christchurch and Ben Rayner and Nick Marsh collected it on behalf of the club.

Ben Bridgen from Wimborne and Colehill received the Achievement Award for scoring – in one match – 133 then taking 7-26. How’s that?

Groundsman of the year was won by Martinstown and the Fair Play award was won by Swanage.

Ian Booth from Swanage was presented with the award by Merrick Wilkinson, a member of the umpiring committee.

He said: “My highlight of the season was my first tie as an umpire, which included an exciting run-out at my end.”

Groundsman of the Year: Martinstown